You're Here: Home / Top Of The Crops - Tomatoes

Top Of The Crops - Tomatoes

Growing Tomatoes in a Polytunnel

Tomatoes are a summer crop that smells and tastes great from the smallest cherry variety to large beefsteaks hanging on the vine. It isn’t summer without gorgeously fresh tomatoes eaten straight from the garden.
Home-grown tomatoes taste completely different from the flavourless supermarket offerings, so they are more than worth the effort it takes to grow them - which is considerably lessened with a polytunnel.

Tomatoes originate from South America and they aren’t too keen on our chillier climate. Tomatoes will grow outside during a hot summer, but more often than not they struggle to ripen. A polytunnel can make the difference between tasty ripe tomatoes and hard green ones only good for chutney.
A polytunnel warms the soil beneath it, so you are able to plant out your tomatoes at an earlier date. Warmer soil means quicker, healthier growth. Cold, bare soil doesn’t have the same knack with young tomatoes.
At season end a polytunnel extends the time you have so tomatoes are more likely to ripen. On average a polytunnel adds 6-8 weeks to your growing season.
A polytunnel will also keep the damaging rain and wind at bay but let in all the light they need to fully ripen. Rain rots stems, roots, flowers, and fruits if it doesn’t dry off. This leads to fungal infections such as blight and poor growth. The wind can damage tomatoes by blowing them over, snapping off productive stems and freezing the tender plants.

Polytunnels shelter your tomatoes from the elements in a cosy atmosphere. Too much cold damages plants on a cellular level, but polytunnel protection helps maintain a steady temperature for healthy plants.
This steady temperature keeps the ground moist too, so if you’ve planted directly into the soil water won’t immediately evaporate or hang around in puddles if it’s chilly.
Polytunnels can also help keep off pests. Cats and birds dislodge new plants and all kinds of aphids want to eat your tomatoes if you don’t protect them.

Slugs and snails are persistent so peg the polytunnel down well. A weighted net or fine mesh on either end can keep pests at bay, but fine mesh means the pollinating insects can’t get in. Netting also allows air to circulate and prevent fungal infection such as blight.
You’ll need to check inside your polytunnel for pests even if it’s netted because if they manage to slip in they’ll enjoy the warm conditions and feast of tasty tomatoes enough to breed.
If you’re a fan of cherry tomatoes it’s easy to grow them in hanging baskets, but if you prefer the warmer and safer conditions of a polytunnel choose the smaller, cost-effective mini tunnels which are perfect for small bush varieties.

HOW TO GROW TOMATOES

Tomato seeds are cheap and there are many varieties to choose from but they are all best grown in a warm pot and transferred to a polytunnel or greenhouse in warm weather.
Sowing tomato seeds in pots:

HOW TO HARVEST TOMATOES

Picking ripe tomatoes encourage more to ripen, so pick them when they are ready, don’t hold back. You can usually start harvesting in July, though cherry varieties come earlier.

Starting picking when the fruit is ripe - the size and colour will depend on the variety. Most tomatoes are red but you can also get orange, green, yellow, and purple varieties.
Pinch out tomatoes at the stem but don’t squeeze the fruit as this creates a bruise. Scissors or secateurs can be useful.  Begin at the bottom of the plant if you are able and work your way up.
If you pick a tomato that isn’t entirely ripe, put it on a sunny windowsill to continue the ripening process. They smell divine as they heat up in the sun, and your kitchen will smell amazing.
You can put all fruit that hasn’t ripened by the end of the season on the windowsill or in a drawer with ripe fruit such as a banana. The gas that ripe fruit releases encourages quick ripening of other fruits around it.
If you are lucky, and especially if a polytunnel is involved, you may have a glut of tomatoes. Give them away or freeze them for winter strews or rich bolognese sauce.

Tomatoes are one of those crops that taste completely different from the garden - supermarket versions simply don’t compare.

Vine and bush tomatoes will grow faster and are more likely to ripen in a polytunnel or greenhouse, so if you’re a tomato fan it's worth getting them undercover for a reliable and tasty crop. 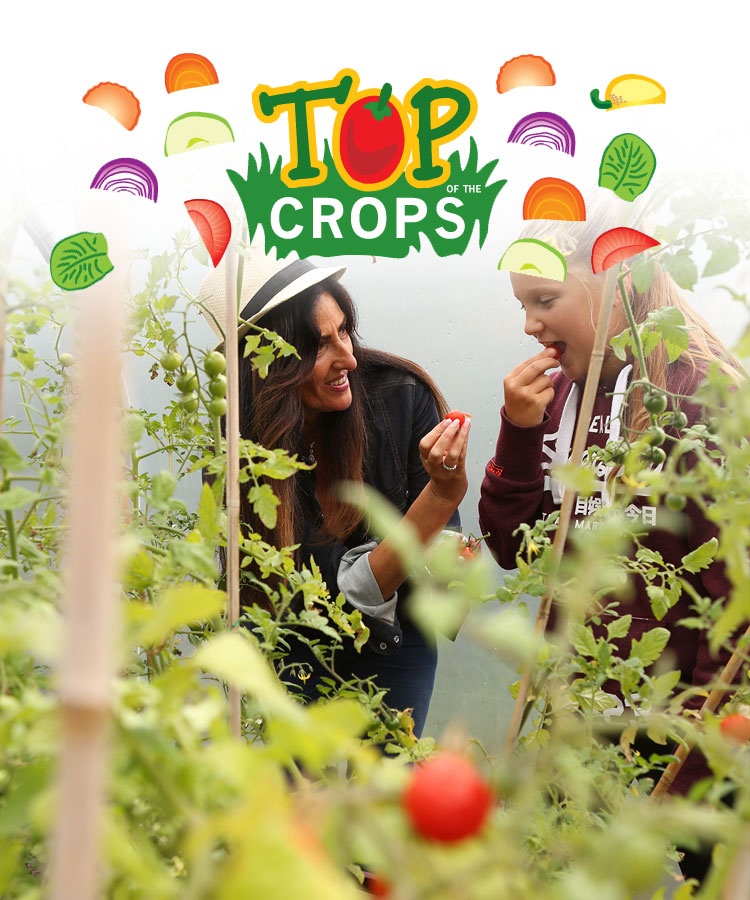