You're Here: Home / Top Of The Crops - Artichoke

Top Of The Crops - Artichoke

It is an architectural plant that offers form and shape to the vegetable plot. The artichoke, Cynara scolymus, is a perennial plant with large edible flowers. Once transplanted to its final growing place, this striking plant will continue to offer edible flowers for many years to come. It is not a difficult plant to grow, but growing it in the polytunnel makes is super easy.

Growing Artichokes in a Polytunnel

Artichokes are popular not only for the pleasing stature the plant brings to the vegetable plot but also for its mild flavour. Its flavour can be compared to a light-tasting celery or aubergine and an easy plant to grow.
Artichokes are a relatively easy perennial plant – a plant that produces flowers and thus edible balls for many years - to grow but with a polytunnel, they are even easier.

To sow from artichokes from seed…

As artichokes grow, they sprout ‘suckers’. These suckers can be cultivated for the following year and although more expensive, these plants tend to give a better-quality plant and edible bulb. Growing from seed is cheaper and a great project for inside your polytunnel but you need to be selective about which plants you continue to grow on.
Grown from seed, the quality of artichoke plants can be variable and ‘stringy’ thus, it pays to over-plant so that you have plenty of choice when it comes to which plants to keep and which to assign to the compost heap.
As well as sowing from seed, you can maintain a constant crop of artichokes by planting a sucker from an established plant. Select a strong sucker from established plants in March to April and when they are around 20 to 30cms in length (8 to 12 inches). Plant the sucker in its final growing place in the vegetable bed in the polytunnel. Keep the soil moist but don’t over water and make sure the temperature in the polytunnel is not too hot nor too cold. Artichoke plants grown from suckers will flower and produce an edible ball the same year, unlike plants grown from seed that require a full 12-month growing cycle before they can be harvested.

To successful grow artichokes you will need;

Like most vegetable plants, artichokes are susceptible to pests, two of which are:
Slugs & Snails – they feed on the young plants, leaving their tell-tale trail as a clue to their invasion of your artichoke crop. As well as beer traps, there are other remedies that deter slugs and snails including saw dust or egg shell barriers, as well as copper tape. Some gardeners will also rely on biocontrol products too.
Aphids – these pesky insects can invade the polytunnel, a rich fertile ground offering them a plethora of plants to eat, including your artichokes. Look for colonies of aphids on the soft short tips of plants or on leaves. As they suck sap, aphids excrete a sticky honeydew which encourages the growth of black, sooty mould. As well as squishing between finger and thumb, you may also need biological control of aphid colonies in the polytunnel.

Artichokes gives many fruits over many years but after a time, they become exhausted and the crop will need to be renewed.
To harvest artichokes;

April is seen as the start of the growing season and although temperatures are slowly creeping upwards, there may still be a chance of frost in some places as well as scattered April showers.
If you are growing artichokes from seed you can sow the plants directly outside from April onwards. You can get a full month head start by planting your seeds undercover in the polytunnel in March and continue to grow them in the tunnel for the coming years.
Harvesting or artichokes happens late in the season in the first year but if you have sown the seeds directly outside, you will need to wait until the following summer until you can harvest the plant.
But in the polytunnel, July, August and September are lush times with not only artichokes to harvest but several other fruit and vegetable crops too.

Related to the thistle, there is no denying the stature and grandeur of this elegant plant. The bulb has a delicate flavour and for any gardener, growing artichokes is a delight.
They can thrive outside but the polytunnel enriches the growing environment, protecting the tender plants from frosts and pests, two of the main issues that affect artichokes.
With warm, fertile soil, regular watering and feeding, artichokes grow well in a polytunnel especially as they can grow undisturbed in one place for years to come. Why not add artichokes to your polytunnel beds? 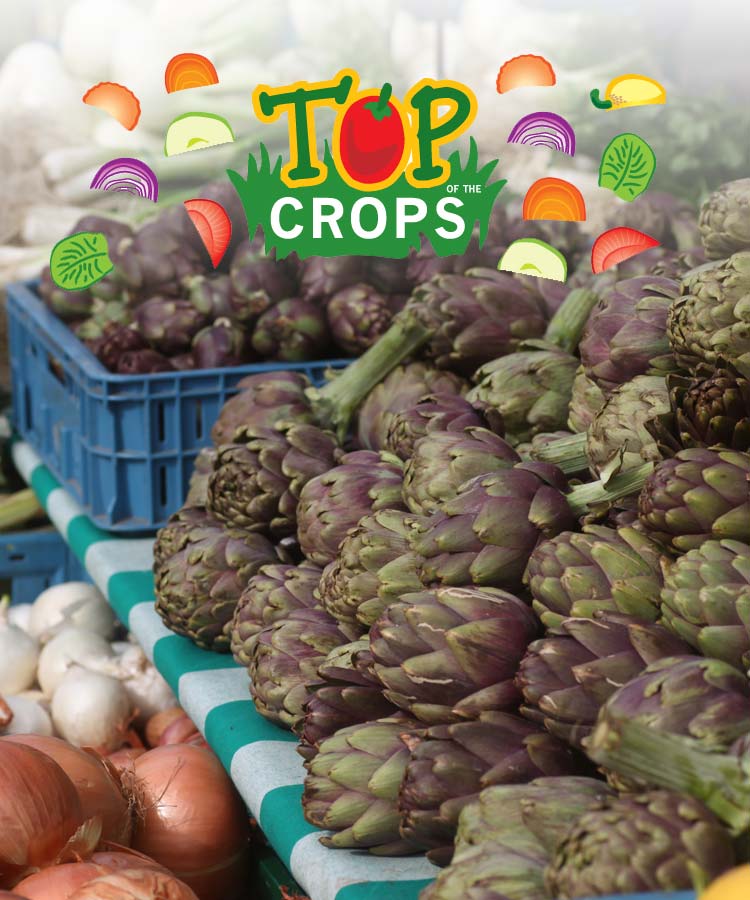